I’m in a thicket of academic writing this week (1930s Canadian agitprop, exposition in Oedipus Rex, Glenn Gould vs. CODCO) but I made a discovery in the library on Thursday that I feel the need to document before it gets pushed out of my mind by something else less compelling, if more urgent. 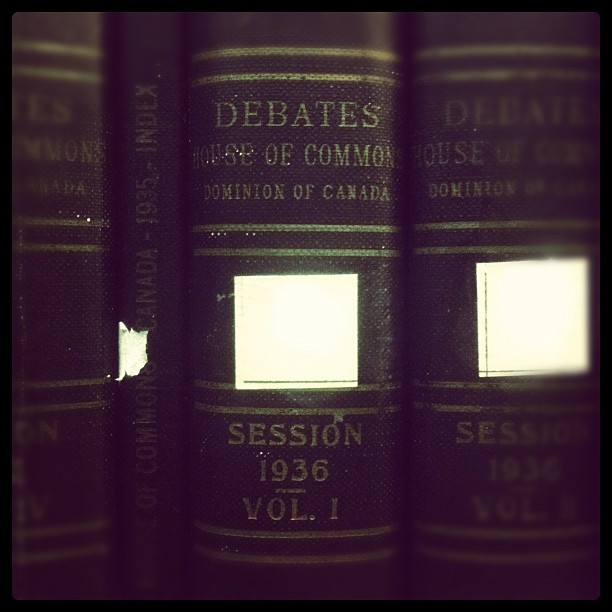 I was wandering the edge of the stacks, looking for a spare workstation on which to check on an assignment when I noticed that I was walking past row upon row of bound volumes of debates from the Senate, the House of Commons and the Assemblée Nationale du Québec. Really, I was just killing time before meeting a friend for coffee, so I decided to see if I could find the volume of Hansard in which Pierre Trudeau told Joe Clark to shut up about my mother[^1]. I quickly realized that this would be nearly impossible without knowing the session in which that particular incident took place, and although I do have it written down somewhere, I don’t have it committed to memory.

Then I had another idea. Last spring, in the days leading up to and following our 41st federal election, I’d bought and read Vincent Lam’s excellent new biography of T.C. “Tommy” Douglas[^2]. One episode in the book had stuck with me above all else. When Tommy Douglas was first elected to federal office as the Co-operative Commonwealth Federation MP for Weyburn, Saskatchewan at the age of 30, he had declared in his maiden speech to Parliament that through him “young Canada speaks.” I couldn’t get those three words out of my head, especially after the election when ageism seemed to have became an acceptable reaction to one of the youngest Parliaments in Canadian history.

I’d wanted to read the speech in its entirety ever since, and this seemed the moment. It was easy enough to find